Media and Games Invest submits itself to strict Corporate Governance Principles, out of its conviction, that it is the prerequisite for building a successful and sustainable business. 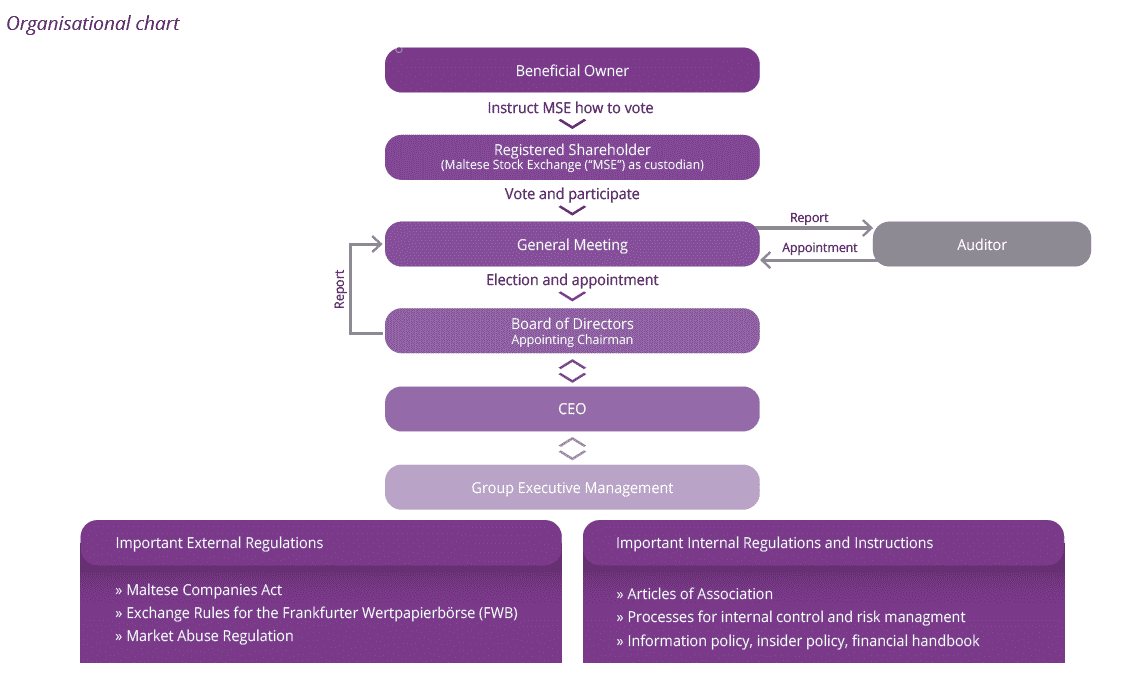 Media and Games Invest plc is a public limited liability company incorporated under the laws of Malta on the 21 March 2011. The Company is registered with the Malta Business Registry in Malta, with company registration number C 52332 and with its registered office at 168 St. Christopher Street, Valletta, VLT1467, Malta. The Company’s LEI is 391200UIIWMXRLGARB95. The Company is the parent holding company of Media and Games Services AG (Switzerland), blockescence DLT solutions GmbH (Germany), Samarion SE (Germany), Applift GmbH (Germany), Vajrapani Limited (Malta), Platform 161 Holding BV (Netherlands) and ReachHero GmbH (Germany). The Company’s shares are listed in the scale segment of Frankfurt Stock Exchange and XETRA in Germany. In October 2019, MGI listed a public bond in the open market segment of Frankfurt Stock Exchange. The Company’s subsidiary, gamigo AG, has a public bond listed in the open market segment of Frankfurt Stock Exchange and in the regulated segment of the Nasdaq Stockholm in Sweden.

The Company’s board of directors is responsible for managing the Company’s business. Corporate governance in the Company is based on Maltese law, the Company’s Articles of Association, the rules and regulations of the Frankfurt Stock Exchange and internal rules and instructions. Following the listing on Nasdaq First North Premier Growth Market, the Company applies Nasdaq First North Growth Market’s Rule Book and the Swedish Corporate Governance Code (the “Code”). Companies do not have to comply with all of the rules in the Code, instead these Companies have the possibility of choosing alternative solutions that they consider better suited to their particular circumstances, provided that any deviations are presented, that the alternative solution is described and that the reasons are explained in the corporate governance report (the “comply or explain principle”). Any deviations from the Code will be reported in the Company’s corporate governance report, which the Company will prepare for the first time in connection with the annual report for the financial year 2020. At the present time, the Company has identified the following deviations from the Code.

Appointment of board members and chairman of the board

The board members of MGI have all been appointed for an unlimited time. They can, however, be dismissed by an ordinary resolution of the shareholders in general meeting (a simple majority of the nominal value of shares represented and entitled to vote at the meeting). The Company believes this to be a well-established and efficient practice for many years and therefore wishes to continue with the same.

The chairman of the board is appointed by the board itself, which procedure is set out in the Articles of Associations and is a well-established procedure.

At this point, the Company will not establish a remuneration committee. The board of directors of MGI consists of three individual directors and due to the size of the board the Company believes it to be more efficient not to establish such a committee.