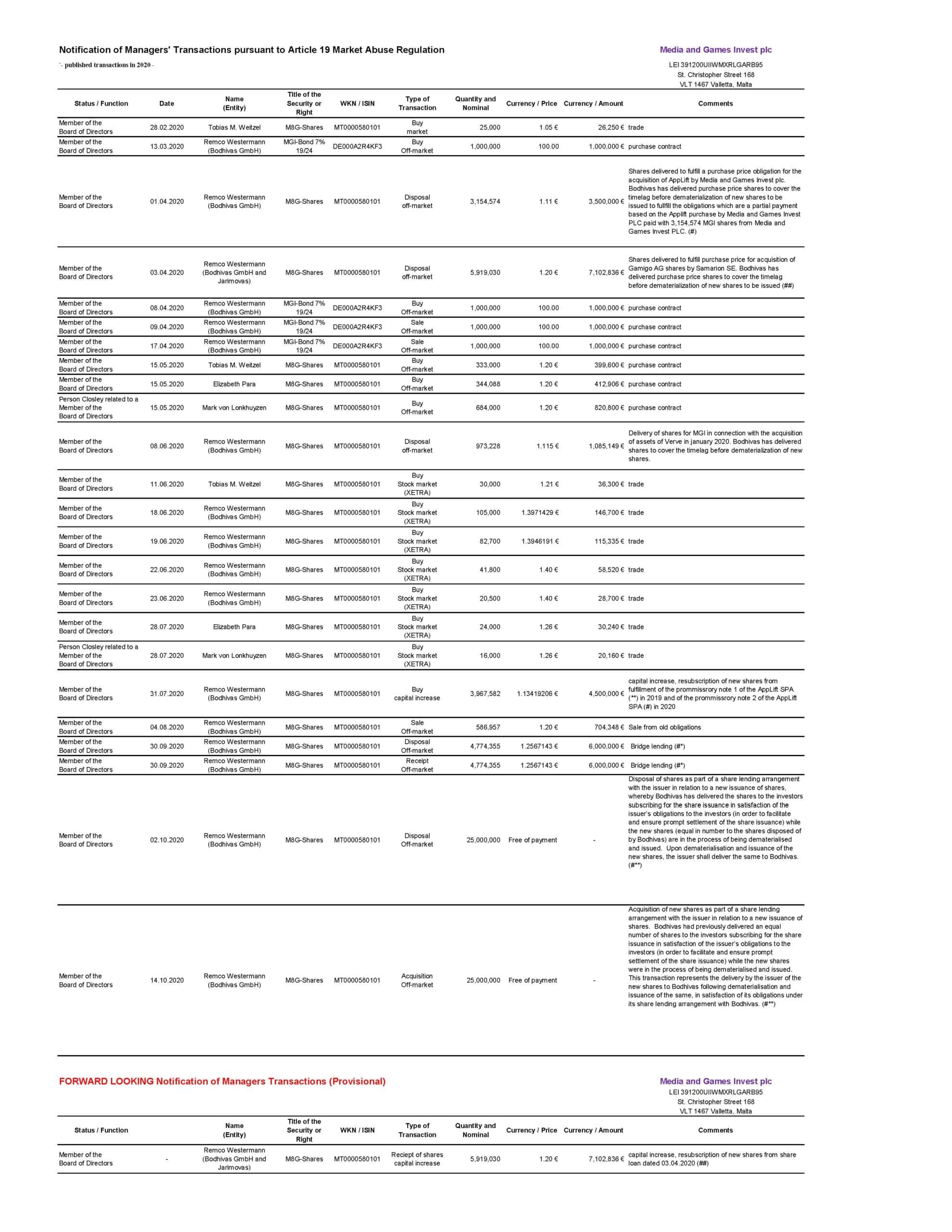 *Remark regarding the directors dealings:

MGI has performed and might also in the future perform capital increases for share-for-share acquisitions (eg. shares in ReachHero) as well as for capital increases in cash (eg. capital increase of nominal Euro 8 million at Euro 1,15 per share in July 2019). As due to KYC (“know your customer”) requirements and formal procedures in Malta capital increases are very slow, the Company has decided to implement a different procedure to enable MGI to deliver the shares much sooner.

This procedure works as follows; (1) Bodhivas, the Holding company of Chairman of the Board and majority shareholder Remco Westermann, delivers the shares to the investors who in turn pay the cash for the shares to Bodhivas. (2) Bodhivas then subscribes the equivalent number of shares for the same price from the Company and pays the investment amount to the Company. (3) After finalizing the formal processes, the Maltese Stock Exchange creates the new shares and delivers them to Bodhivas. With this last step the process is completed; the investor has received its purchased shares immediately early in the process and Bodhivas – after the described delay – obtained its original number of shares.

Due to Director Dealings obligations, the Bodhivas’ Sale of shares (# (1)) is shown as a Director Dealing ‘Sale’ as well as the receival of shares at completion of the capital increase (# (3)), that is shown as a ‘Buy’. Caused by the above described time lag, there are discrepancies between the ‘Sale’ and the ‘Buy’ dates. In case there are still capital increases in the phase of “Share Increase in Process of Registration”; the balance of the Director Dealings overview suggests a large ‘Sale’ from Bodhivas. Without the above information, this can lead to a wrong conclusion. This is why the Company has decided to voluntarily report the “Share Increase in Process of Registration” as well, which then – upon completion of the process – is being moved up into the formal list of Director Dealings.